Snails is the general name of all mollusks. They are subdivided inti types and are adapted to diverse areas of habitat. In general, snails have common composition:

The body of the mollusk, namely the leg, is one of the largest muscular organs of the animal. Due to its structure, the mollusk moves along the surface. 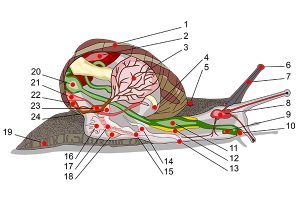 Together with these movements, the glands produce mucin or mucus, which facilitates gliding, helps the snail to reduce its resistance to surfaces. This substance is able to protect the body of the snail from cuts, scratches, splintering, and other damage.

In nature, there are many species of terrestrial representatives and the inhabitants of marine and freshwater bodies of water. These groups are represented by a great number of fast and slow snails.

The gastropod mollusk of the helicid family is able to reach speed of up to 7 centimeters per minute. These leisurely animals are able to travel certain distances in search of food. However, they do not hurry as soon as they reach their goal.

Heteropoda and Pteropoda are the sprinters. At the time of the hunt, these tiny inhabitants of the sea can reach speeds of up to 12 meters per minute.

Conversely, some types of parasitic mollusks never move. They attach to coral reefs, lead a parasitic lifestyle, do not leave their habitat.

Many types of competitions are organized in England yearly. Snails are also very popular, so the Englishmen organize snails races every year. 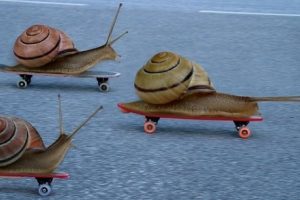 Two hundred garden snails and fans gathered in Norfolk County. According to the conditions of the competition, the participant who leaves the intended boundaries of the circle, becomes the winner.

The tradition to organize these competitions was founded in 1960, becoming a traditional entertainment, attracting about two thousand fans.

The same «races» are arranged in many countries. For example, in 2014 Nizhny Novgorod held such competitions for the first time. The competitors were Akhatins, and according to the terms of the competition, their desire for the finish was “stimulated” by their favorite treat.

However, the Archie keep records among the gastropods. They run 32 centimeters in two minutes. The prize for the winner was a silver goblet filled with lettuce to the top.

This record has not been beaten since 1995, although the applicants are quite close. For example, in 2010, the winner Sydney covered the same distance in 3.41 minutes. For the fans, the difference is not significant, however, it is a real achievement for the participants!