> Information > Types and variations of snails 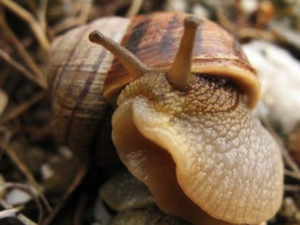 There are many animals and other creatures in nature and the amount of different species is very high.  There are more than 3000 species of different mollusks in Australia. They are divided into two big classes herbivores and predators. Herbivorous mollusks eat plants, while predators are fed with other species. In our lands there are more «vegetarians», however, predators can be also used. For instance, a waterfowl predator Helena snail lives in aquariums, because if its beauty and ability to control the extreme breeding of aquarium inhabitants. Predators can be terrestrial, and water.

Herbivorous are primarily pests that can damage orchards and vineyards. One of the examples is Asian Snail-Tramp that is able to reach 18 mm in lengths. It is fed with grape vines. Even though the variety of shellfish is huge, not all of them are used for food.

Edible snails were used for food in the Ancient Rome and Greece. People usually fed them with flour, aromatic herbs and wine to make their meat delicate and tasty. Since different countries consume diverse types of mollusks, variety of recipes is also wide.

What are the kinds of edible snails?

People from Europe usually eat terrestrial snails of Helicidae family. It has its dubtyoes, whuch depend on the place of inhabitance

Which snails are fit to be eaten?

Although there are many types of edible snails, the tastiest, whose meat is used for cooking are . grape and garden snails. These snails are cultivated in specific farms, such as the Snails House farm. They are grown for sale and are used in the pharmaceutical industry.

Helix Pomatia is one of the most popular types used in cooking. It takes the individual 2-3 years to reach the size, suitable for eating. Its weight can attain 30-45 grams.

Helix Aspersa Maxima or large gray snail. Its cycle of cultivation is shorter compared to grape snail. To reach commercial and consumer criteria in size, they need 5-7 months. Weight of the adult of this species is 16 to 25 grams. It can lay 120-180 eggs. 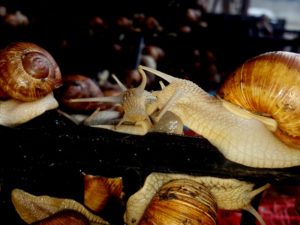 Helix Aspersa Muller, gray little snail is used in cooking only. Despite its comparatively small size, its preparation and initial treatment are easy.  It is usually cooked together with the shell. Its weight is only 6-10 grams, while laying eggs is 80-120 eggs. It takes 5-6 months to grow.

Otala lacteal is not so popular, but edible type. It is also known as Spanish snail. It is consumed by the Spanish, Portuguese, Greeks and people from other Mediterranean countries. It is a predator and can be collected in the wild. It is somewhat smaller than Helix Aspersa, with different patterns of the shell.

Cultivation of mollusks requires careful conditions. They are usually placed in the conditions that are favorable for their cultivation. Such conditions are favorable for giving offspring, increasing weight, cleaning, collecting and frozening. After packaging they are delivered to restaurants.The snails, depicted above are popular in cuisine of the world due to their tasty meat and wonderful useful properties.

How to prepare French snails? 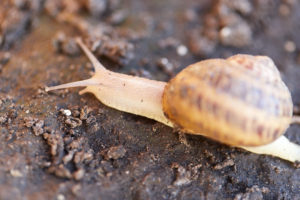 Helix Pomatia from Burgundy, is the most popular in France. It is used to prepare Escargot de Bourgogne. In general, the French are the most famous consumers of snails in the world, so they eat about 27 thousand tons or 700 million pieces, while the demand in this type of food is satisfied only for 60-70%. As a result, this type of snails is imported from other European countries.Recipes from traditional French cuisine are simple based on escargot. Fresh, frozen or canned snails are also used for preparation. The principle is mixing the boiled fillet with butter, different spices and stuffing the shells. The title of the receipt  depends on the ingredients, but the consumers from other countries call it French.