> Information > THE WORLD DEMAND FOR DISHES FROM SNAILS

People have long been consuming snails in the world. Empty shells of mollusks had been found in the caves of ancient people. People from the Ancient Rome and Greece liked this product. However, the demand has recently increased.

About 420-450 thousand tons of snails, which worth about $ 12 billion are delivered to the world market annually. The leader in snails purchasing is China. The second place belongs to the European countries: France, Italy, and Spain. In addition, they are popular in Greece, Belgium and Romania.

Baltic countries, Belarus and Ukraine did not consume it several decades ago; however, they are not consuming escargot. 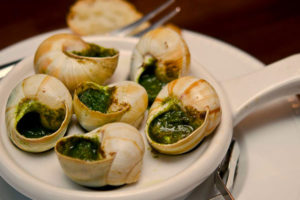 In Ukraine, demand has grown by more than a hundred times over the past four years. For comparison, in 2013 we consumed 3 tons of mollusk, and 360 tons in 2017. It is explained by the fact that Ukrainians continue to get acquainted with the cuisines of other countries and expand their culinary horizons.

France is the motherland of the most exquisite dishes from snails. they are used as an ingredient for salads, in soups, in the form of boiled, fried and stewed. However, the most famous delicacy is the Escargot. There are several popular recipes: in Burgundy, Dijon, Limousine. All of them are named after regions or cities of France.

Escargot base is a creamy sauce, to which different ingredients are added, giving an amazing flavor to the dish and emphasizing the taste of tender snail meat.

In Spain, snails are included in the menu of many restaurants. They are consumed on holidays. They are particularly popular in the Spanish dish — paella with snails. In addition, they are consumed as an independent snack of dietary meat, caracoles.

Tourists must try snails in tomato sauce on the island of Elba in the Italian region of Tuscany. Spicy herbs, as a constant attribute of the Italian national cuisine, are added to it.

An interesting story has happened in Japan. During World War II, the Japanese army tasted Achatina giant snails, which were found in the South Pacific. After the war they were brought to the Land of the Rising Sun. Achatina have become incredibly popular. They began to open farm for their breeding. In addition to the delicate taste, as adherents of alternative medicine, the soup from these snails is considered the best cure from tuberculosis.

The Akchatines began to distribute into other countries, where they also began to breed them. However, in natural conditions, this species can only survive in a tropical climate. 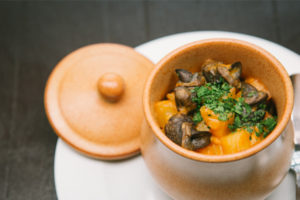 In our latitudes, a snail is harvested and grown. It is the most popular edible shellfish, which occupies the biggest share of the total snail meat market.

Most of them are collected in the western part of Ukraine in natural conditions. From there they are exported to the Baltic countries, where they are processed and shipped to France, Italy and Spain.

Snail farms, which are opened in Ukraine work on the domestic market. Raw materials are purchased by restaurants, supermarkets, companies that produce frozen convenience foods, as well as pharmaceutical and beauty factories (make anti-aging creams and therapeutic ointments on the basis of snail mucus).

Snail popularity is growing every year. This is one of the industries, where the demand surpasses the supply.  Ukraine may probably become one of the leading exporters, because our soil, industrious people will help develop this business quickly.