> Information > The most well-known receipts from snails

Many people tend to believe that cooking unusual food is difficult and time consuming; however, preparation of snails is simple, while the final products are delicious and impress with unusual taste.

The founder of this dish is unknown. Many people consider that primitive people were the creators, since they consumed everything that was simple to find and easy to cook. Someone thinks about the ancient Greeks, who valued the expediency of this product; or the French, who created their unique recipes for cooking. However, this dish has found thousands of gourmets, who appreciate its exclusivity and delicacy.

In the period of the first settlers, snail meat was the most available source of food. Those people used berries, mushrooms, grass and snails, which were prepared on bonfires, without considering the taste of future product.

The ancient Greeks were very demanding in their choice for food and used this product in the ration. They valued mollusks for their high content of useful substances, and cooked snails with the combination of spicy herbs, thus focusing on the taste of meat. Receipts with the preparation of snails still preserved in the culinary books of that period (1 century BC — 2 century AD).

The first creator of escargot is considered French. They say that this receipt was cooked spontaneously for the arrival of one honorable guest, who liked this dish to the extent that asked his cooks to further prepare them for holidays. The escargot receipt history starts with this story. The classic recipe includes:

There are many variants of escargot and the title of receipt depends upon the ingredients, contained in it.  Traditional receipt includes butter, greens and garlic. In case of walnut addition, the dish will be called «snails in a limousine», while the roasted peanuts are included in the dish “in Somiersky”», which contains Dijon for piquancy. There are numerous receipts of escargot and each country is famous for its own receipt. The cooks of different cuisines add their own peculiarity, which makes the dish extravagant and particularly delicious.

The French cuisine has a recipe, named after Napoleon. Mollusks are cooked in a hot tomato sauce, with mushrooms and almonds. The dish is called «snail Napoleon».

Gourmets adore snails not only in France, but in other countries. The Spaniards have a tradition of eating escargot. Karakoish is a traditional food for beer in the Portuguese. Snails are boiled for several hours in a spicy broth. Then they are eaten with hands and hands are washed with beer. There are many cafes that cook this delicacy for residents and visitors of the city. From May to August, a huge amount of karacoish is easten. One more Spanish delicacy is «Caracoles a la madrileña». Escargot in this receipt is stewed with a jamon with spices. 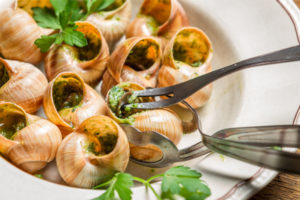 Italians like decorating their food with aromatic herbs, sauces and spices. In order to add piquancy to the existing products, they changed the receipt of traditional ravioli and added the snails meat to it. The dish received the title cappelletti. They are small dumplings with ricotta and parmesan. Polenta was also changed. Corn flour is boiled to a dense constancy, cooled and cut. Mollusks, stewed in brandy and spices are covered with Parmesan cheese. As soon as the dish is placed into oven, polenta can be considered ready.

The Turks cook plakhea, consisting of stewed vegetables, spices and tomatoes. This dish has later become famous in Bulgaria, but cooks added snails into it.

There are many receipts, prepared with an addition of snails meat. Combination of escargot with other products and species can create masterpieces.