Helix is ​​a genus of gastropods of the Helicide family, which is a large group of land snails. Various species of this genus are distributed throughout the world. According to scientists, these snails have existed on our planet since the Oligocene epoch (about 30 million years!).

The most common representatives:

Under natural conditions, grape and shiny mollusks are found in Ukraine (the second type is much less common).

Gastropods of the genus Helix in cooking

Many people in our country still consider snails to be strange slow creatures that also harm agricultural crops. However, these animals have been used as food around the world for thousands of years. During excavations in the caves of primitive people, empty shells were found, indicating that even in ancient times, mollusks served as food that can be easily obtained and fried on coals.

There is also information that snails were on the tables of the Romans and Greeks, they were taken with them in pickled form by sailors, and ate by monks.

The real cult of snail meat came to France. Until now, the French consider their national pride a dish that has spread all over the world. We are talking about escargot (clam fillet baked in a creamy sauce in a shell). National Escargot Day is celebrated on 24 May. In addition to this delicacy, Europeans add gastropods to soups, salads, grill, pickle, etc.

Gourmet French cuisine has over a hundred recipes using this healthy product.

Snail fillet is not only tasty, but also very healthy. This is the record for protein content combined with low calorie content (16 grams of protein and 67 kcal per 100 grams). Meat has the following properties:

What kind of snails do they eat?

Two types of shellfish are used for cooking: 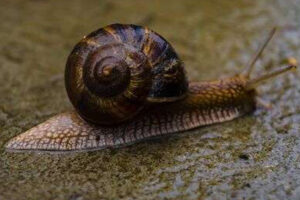 Representatives of the second group are not found in the natural conditions of our region and are grown on farms.

Grape mollusk can be found in almost every corner of Ukraine. Like other snails, they love shade and moisture, crawling out in prominent places at dawn and hiding from bright sunlight in foliage or under stumps.

There are articles and videos how to collect snails in nature conditions, in the internet. If you are sure of the cleanliness of the surrounding area, collect shellfish in the nearby forest and experiment with unusual dishes.

Important! Pay attention to the process of cleaning the body of gastropods. This is an important step in cooking.

Despite the fact that dishes with snail meat have not yet been popularized in Ukraine, the process of familiarizing our residents with this useful product is actively moving. Every year open snail farms and surely soon the menu of many restaurants will include shellfish that will conquer us with their exquisite and delicate taste.