This snail has another name, mountain snails. The major territory of its habitats is coastal marine climate of Southern France, Turkey, the Crimea, Georgia, the Balkan Peninsula and Italy. It is possible to find these snails in the territory rich in mountains, clear meadows, lawns, fresh air and tons of greens. The literary translation of this snails is Helix lucorum or «forest curl» in Latin. 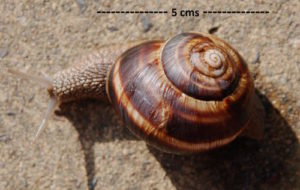 There is an opinion that the people from the Roman Empire transported this mollusk to the European countries. These animals came to the Roman Empire from the Ancient Greece. They also consider snails’ mucus to be very useful for soil.Taking into account the insignificant population of this type of snail, the cooks often substitute it with grape snails in cooking. This animal is included in the red book of Ukraine, particularly to the group of the endemic subspecies of the Turkish mollusk, under the title of «Crimean» or «Krinitsky’s snail».

The occurrence of a white strip evocative of the equator on the shell is regarded the exclusive feature of the snail. Dark background is evenly divided by this strap. This snails has the shell with a blunt conical curl and its color is different, changing from reddish-yellow to brownish-black. 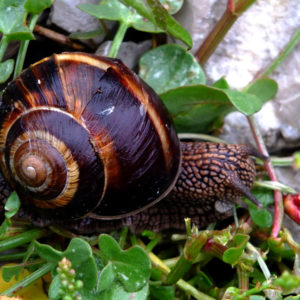 The shell is unequally striated by light strips, however, transverse marks and spiral bands, characteristic only of the upper curls can be found.

As far the parameters of this snail, it can have the diameter of 6 — 7 cm, while its height can reach 5 cm. this snails is considered a giant and its weight can reach 30 g. The body is grey with a greenish tinge.

This snail prefers young greens and is able to destroy the harvest of agricultural cultures. In case there are no greens or wheat, these snails can use rotten parts of plants, mushrooms, fallen leaves for food. Special symbiotic bacteria from the stomach are used to digest the food.

Lungs are used for breathing, while muscular valve prevents drowning. Snails move with the use of the muscle tensions, moistening their leg with the slime. The latter protects snails. This snail is edible and is able to regenerate shell and body, therefore, when they are damaged, they can quickly regenerate.

Lack of ability to fall into anabiosis is a characteristic feature of Helixlucorum . The habitat of these snails is favorable to keeping active all year round, and lack of low temperatures does not make this snail hide into the shell. However, Helixlucorum does not use a protective cover for hiding, but prefers hiding in the ground. 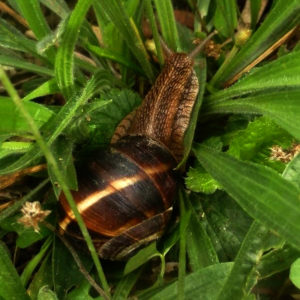 Reproduction of these snails comes when they are three or four years old. Reproduction depends on the season and type of habitats, so if the conditions are favorable, maturation mating happens faster. Taking into account that these snails are hermaphrodites, they use organs of both genders in the process of mating.  They have a particular bag next to the mouth hole, used to shape calcareous arrows for the future love game. As soon as the snail has found its partner, it is joined by soles, releasing the arrows to the partner’s body in order to provoke the creation of the reproductive products required for fertilization. The theory states that in the process of mating, the partners exchange organs for reproduction.

The breeding chain has a long stage of preparation for laying eggs. Mollusks take much time t prepare for laying and choose the most favorable conditions for it. They choose soil, climatic conditions and ability to get nutrients. The size of eggs may reach six millimeters in diameter. As soon as it ripens, like the greater part of the Helix family, and becomes able to live independently.