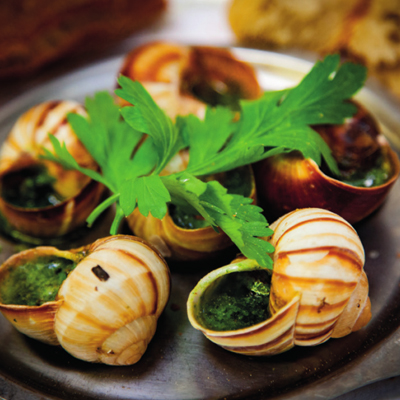 Such a seemingly uncomplicated dish (apart from the main ingredient — snails) is actually called the beautiful French word escargot. The homeland of this appetizer is indeed France, and the inhabitants of the European country consider it their culinary pride. True admirers of healthy snail meat even annually celebrate Escargot Day on May 24.

The dish looks very appetizing and aesthetically pleasing: tender fillet is baked in sauce right in the shells. But in fact, the recipe is simple. So let’s get started.

In order to surprise your guests with a real French snack, you will need:

The dish is prepared in several stages: 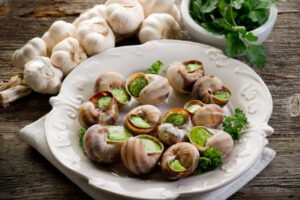 The first stage may have already frightened someone, but do not rush to conclusions. Bowel cleansing involves washing the shellfish from the outside and keeping them in a covered container for 3-4 days without food or water. The only thing that will improve the effect is wheat flour, which can be sprinkled a little on the bottom. Do not forget to leave a hole for air intake, but make sure that the main ingredient of the future dish does not escape.

When buying from a farm, this step is skipped.

Before milling, rinse the snails again, put a pot of water on the fire, wait for a boil and add the clams. Boil for 15 minutes, periodically removing the formed foam with a slotted spoon.

Now remove them from the pan and cool slightly. It’s time to butcher. With a toothpick or other thin but sharp object, remove the body from the shell, put it on the board and separate the leg in one motion. This is snail meat.

After that, it must be boiled again. Now add onions, carrots, wine, bay leaves, salt and pepper to fresh boiling water. Put the meat in there and keep it on low heat for 30-40 minutes. 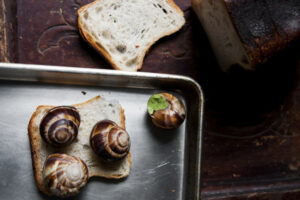 In the meantime, you can do the sinks. Rinse them under water and immerse them in highly salted boiling water with vinegar for 15-20 minutes. This will get rid of mucus. After that, take out the shells, put them on a paper towel. When cool, blot the inside.

We proceed to the sauce: mix soft butter in a blender with chopped parsley and garlic, add salt, pepper and Provencal herbs.

Preheat the oven to 200 degrees. Put a thick layer of salt on the bottom of the baking sheet, and foil on top. So the shells will be stable. Put some sauce on the bottom of each shell, then fillet and sauce again on top. Put on a baking sheet and sprinkle with grated cheese. We send to the oven for 7-10 minutes.

Escargot is served hot with dry white wine and baguette. You can get a delicate fragrant fillet with a toothpick or a special fork. And soak the rest of the sauce with bread.