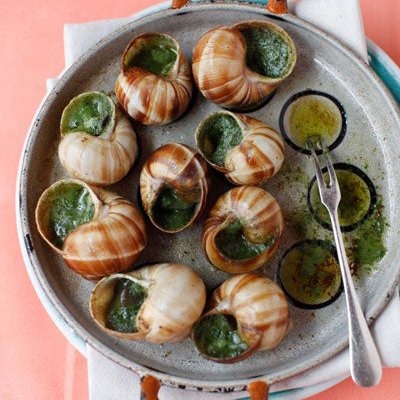 French cuisine is renowned for its sophistication and originality. Despite the fact that snails have been eaten for thousands of years (empty shells were discovered in the caves of primitive people), the French were the first to popularize this product as a delicacy.

The most famous French snail dish is escargot. This hot appetizer is distinguished not only by its delicate taste, but also by its unusual spectacular presentation. Snail fillet is baked in a creamy sauce right in the shells. The delicacy is served in the same form on special plates with holes, which are called escargottes.

France holds the record for eating snails. During the Christmas week alone, about 200 tons of shellfish are eaten in Paris. And the main dish on the French festive table is stuffed snails.

Every year on May 24, the French celebrate National Escargot Day. It is not hard to guess which appetizer is considered the king of this holiday.

In this article, we’ll show you how you can prepare an exquisite French snail dish in your kitchen.

Where can you get snails?

This is the first and most important question that arises when mentioning recipes with snails. In fact, now even in Ukraine it is not difficult to get such an unusual ingredient. Live and refined shellfish are sold on special farms.

In online stores and on the shelves of large supermarkets, frozen gastropods and even escargot kits (meat and empty shells) are found.

But in principle, the main character of today’s recipe can be obtained at no cost in the nearest forest. After all, we are talking about grape snails, the most widespread type of terrestrial gastropods in Ukraine.

Important! Collecting snails in nature is allowed only when you are confident in the environmental friendliness of the surrounding area. Otherwise, it is better not to risk it.

Snails love to crawl to the surface on a rainy day or in the morning. In hot weather, they are more difficult to find, as the animals hide in thickets, under stumps and fallen trees.

After harvesting or buying shellfish from the farm, go to the kitchen for a new experiment.

Ingredients and step by step recipe

The good news is that apart from snails, there is usually no difficulty with the rest of the dish.

So, to prepare escargot you will need:

Let’s start with the snails. If harvested from the wild, be sure to starve them for 2-3 days to cleanse the animals’ intestines. Sprinkle the shellfish with water a couple of times a day to boost activity.

Now is the time to prepare them for milling. Before cooking, rinse the snails well and place them in boiling water for 15 minutes. Skim off the foam with a slotted spoon during cooking. Remove the clams and place on a plate, let cool slightly.

Then you can easily remove the body from the shell using a thin fork or tweezers.

Place the snails on a board and separate the fillets with a sharp knife (this is the leg with which the animal crawls).

At this time, prepare empty shells: 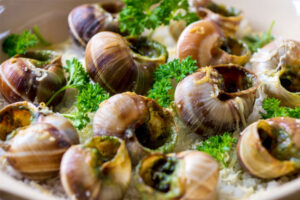 You can quickly prepare the sauce at any stage. Combine butter at room temperature with chopped garlic and parsley in a blender. Season with salt to taste.

Place a thick layer of salt on the bottom of the baking sheet and place the foil. This is necessary for the stability of the shells.

We put each shell on a baking sheet, pressing down slightly. We send the dish to the preheated oven for 7-10 minutes.

Serve hot with white dry chilled wine and fresh baguette. Fillets are removed from the shell with a special device (two-toothed fork) or a skewer (toothpick). The rest of the sauce is soaked with a baguette, washed down with wine.