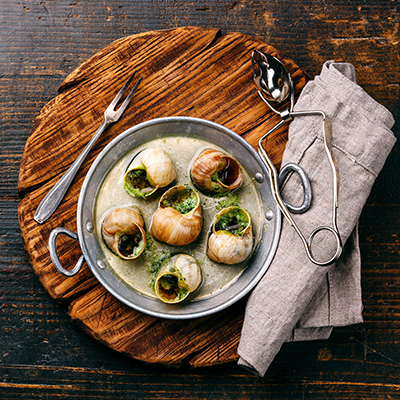 Escargot is an exquisite French delicacy that has won the hearts of gourmets around the world. Despite the intricate name, it is not at all difficult to prepare, and the ingredients for the dish can be found in the refrigerator of any housewife (of course, with the exception of the main character — snails). 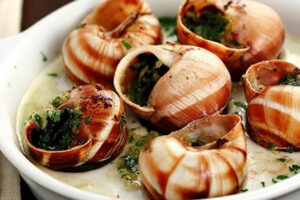 What is escargot? This is a hot appetizer also called “stuffed snails”. Clam fillets are baked right in the shell with a creamy sauce. The delicacy is served in special plates with holes — escargottes. A small two-pronged fork serves as a device, with the help of which the tender meat is removed from the shell. The rest of the sauce is soaked in a fresh baguette, washed down with chilled dry white wine.

The delicacy really looks spectacular, and the taste is simply amazing, so if you decide to cook this appetizer for your guests, they will definitely be delighted. From this article you will learn the recipe for snails.

So, to prepare this dish you will need:

Let’s get down to the process. First you need to cleanse the inside of the snails. This process is easy, but lengthy. Fresh snails are placed in a container and starved there for 3 days to empty the intestines. Periodically, the molluscs are washed under running water.

Then put the pot of water on the fire and bring to a boil. After washing the snails again, we throw them into boiling water, where they spend about 15 minutes. We take out the mollusks with a slotted spoon, let them cool down a bit and start preparing the fillets. 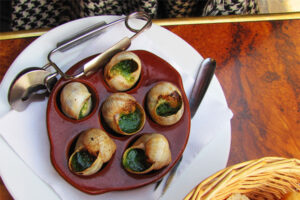 Use tweezers or a small fork to remove the body from the shell. Putting the snail on the board, use a sharp knife to separate the leg of the clam. This is the snail fillet.

After washing the meat under running water, put it in fresh salted boiling water along with carrots, onions and bay leaves. The snails are simmered for 40 minutes.

In the meantime, let’s prepare the shells. We dip the empty shells without remnants of mollusks in very salty boiling water to remove mucus. The longer the shells are boiled, the better (at least 30 minutes). Then we put them on a paper towel, drying them also from the inside.

Let’s prepare the sauce: mix the butter with chopped garlic, chopped parsley and parmesan (if you don’t have it, it doesn’t matter, the appetizer will turn out to be delicious anyway). Salt and pepper to taste.

Note. The sauce will be more uniform if you use a blender.

Now turn on the oven at 200 degrees and start stuffing. We take the shell, put some sauce on the bottom, the cooled snail fillet and cover the top with the sauce again. To prevent the dressing from spilling out during baking, sprinkle a baking sheet with a thick layer of salt and cover with foil on top. This will make the shells more stable. If you have an escargottes, use it.

We put the shells with the filling up and send them to the preheated oven for literally 5-7 minutes. Even during the cooking process, you will feel an amazing aroma that will instantly awaken your appetite.

As mentioned above, escargot is served with a fresh baguette and dry white wine.