> Information > Nutrition of snails in the nature

The life cycle of snail begins with ripening in the eggs. After mating, the adult specimen lays eggs in the soil, digging it down to a depth of 10 centimeters to protect it from predators. After hatching, the mollusk is small, transparent, but steadily striving to survive. The first food that it consumes is the remains of the shell where he grew up. It contains a huge amount of minerals. These are the first elements vital for strengthening the shell and gaining energy to get out of the shelter. As soon as the eggs are laid, the adult leaves them. 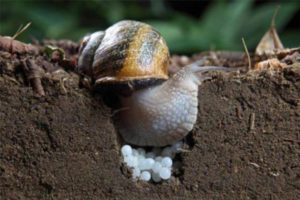 Parents carefully choose a place where the future offspring will mature. Since the quality and mineralization of the soil plays an important role in the early life of the fry. Vital functions are laid in this period.

After the shellfish hatched and ate the shell, it has some time to get to the surface. This process can take up to ten days. Therefore, he will eat everything in the soil.

The digestive system of snails is interesting because it has teeth. It sounds unusual and one question arises: where does the snail fit 2500 teeth?  The oral cavity of mollusk has an extensive size and passes into the pharynx, which is called radula. The conchiolin jaw is located between the radula and the oral cavity, helping to scrape off the top layer from vegetables or greens. This is the place, where the teeth are placed. Radula is a cuticle, with numerous horny crenations. Thanks to them, the snail eats tough vegetables: carrots, cabbage or cucumbers. However, unlike the other herbivores, this shellfish does not chew its food, but grinds it, so radula is often called a grater. Movable jaws with teeth, turn hard food into gruel, which falls into the pharynx, where it becomes softer and passes through the short esophagus into the goiter under the action of salivary gland enzymes. The stomach is smaller than goiter, so the liver produces enzymes for rapid digestion of food and absorption of nutrients.

The first food that baby snail consumes is the soil. On the way to the surface, the baby snail scraped off the top layer of soil, where nutrients and minerals are contained. The main task at this stage is to strengthen the shell, because its strengthening affects the survival. During this period, the shell grows very quickly; therefore, a lot of food is needed. During the first months of life, the size of mollusk increases rapidly, so all edible greens are eaten.

The period of appearance of the first offspring coincides with the growth of the first greens, thus mollusks harm it. Young snail that reached the surface destroys a large number of young sprouts and harms the future harvest. Therefore, in many states of the USA and Asia, this animal is banned for breeding and import.

Active phase of the snail growth lasts up to seven months. Snail takes maximum weight and increases the shell size. 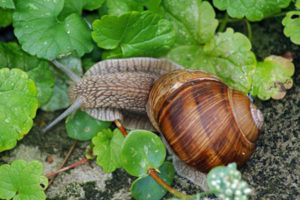 Taste preferences are also diverse. The garden snail is called grape snail, since its most favorite habitat is vineyards, the soil of which is rich in minerals important for growth. However, this little pest causes damage to farmers when it eats young foliage of grapes. In the wild remote from agricultural lands, the animal is harmless to the environment. A young nettle, burdock, dandelion, strawberry leaves, tree bark, berries, fruit of trees are in the ration of snails. Most adults, a delicacy is a decayed foliage or crust called detritus.

While the young specimen is not strong, it consumes young greens. As soon as radula is strengthened, hard vegetables, fruits and bark are included in its ration. Calcium is an invariable component in the growth period. The strength of the shell and duration of life depends on its quantity. After all, the shell is not just a beautiful element of the structure of the body, but also its defense. If the shell is damaged enough, the mollusk will die, because all vital organs are inside of its shell.

Among some species of terrestrial gastropods, amateurs of carrion and small insects were indicated. They consume this type of food due to the lack of other alternative. The variety and quality of ration affects vital signs, but color, making it darker or lighter and adding blotches and stripes.

There are predatory species of snails, such as aquarium Helena and snail Conus, producing sulfuric acid. They destroy the victim’s shell and eat it. However, the snail, habitual for our territories is harmless.