Snails are best known for their speed. And this is not a myth — they really are not the fastest creatures on the planet. But there are much more interesting facts about them than at what pace they move around. 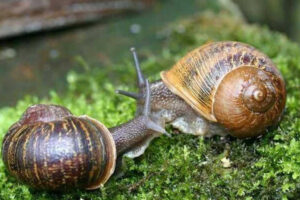 Biologists count about 150,000 subspecies of snails. They are divided into land snails, sea snails and river snails. Therefore, you can find these amazing creatures in almost any climate! They crawl along leaves and ground, swim in salt and fresh water. Some species prefer colder temperatures, while others prefer warmer ones. As for the most famous edible snails — grape and gray — they live in a temperate climate, love moisture and hide in the ground for the winter and fall into suspended animation.

Snails and slugs belong to mollusks, it makes them relatives of oysters and mussels. Moreover, this species of mollusks belongs to the largest group of crustaceans — about 80% on Earth. It is noteworthy that they are also one of the most diverse groups of animals in terms of shape, habitat and behavior.

There is a theory that they became the inspiration for creating the image of Cupid.

One researcher claims that Cupid’s arrow myth can come from the mating rituals of Helix Aspersa, a grape or garden snail. These snails during mating shoot «love darts» at their partners. Such darts contain mucus, increasing the chances of their sperm surviving (snails are hermaphrodites, and both individuals get sperm during mating).

However, before detailed studies, people thought that these darts contained calcium and an aphrodisiac, because Ron Chase from McGill University believes that this could serve as a source of inspiration for Cupid with his arrows, kindling desire.

And the fact that they definitely became the inspiration for the medical invention.

Researchers at Boston Children’s Hospital and Massachusetts Institute of Technology have developed medical glue that mimics the consistency of mucus, which helps sea snails cling to stones underwater. Such glue is intended for the treatment of heart defects and ensures adhesion even of uneven surfaces (if ordinary seams are used in such places, fixing will be less reliable).

Important! So far, this glue has only been used to treat pigs.

Snails love to eat together 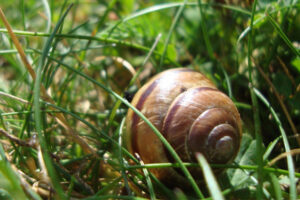 Everyone knows that issues are better solved at lunch, but it turns out that mollusks also comprehended this science. Researchers have noticed that grape snails prefer to eat in the same place and at the same time as their relatives. However, this preference remains, even if there is another food nearby. Perhaps the creatures are suspicious and love to eat proven foods, or perhaps they really know what a family dinner is!

Helen van Zuilen, a 19th-century French secular writer, finished on the  Paris-Amsterdam-Paris highway in 1898 year and reportedly became the first woman who took part in an international automobile race. Her husband, president of the Automobile Club de France, participated in the same car races under the name «Escargo» (the name of the French delicacy of baked grape snails).

The writer Patricia Highsmith took them to parties

Highsmith, whose novels «Strangers in the Train» and «Talented Mr. Ripley» were successfully filmed, preferred shellfish to people. She kept about 300 snails as pets, and they appear in several of her literary works. In the biography of the writer, Joan Shenkar quotes the acquaintance of Highsmith, describing her as «a woman who took snails from her bag and put them on the table when she was at someone’s party.»

That’s all! Learn also not only about interesting, but also useful features of snails in other blog articles.