> Information > WHY SNAILS CLIMB ON TREES IN SPRING 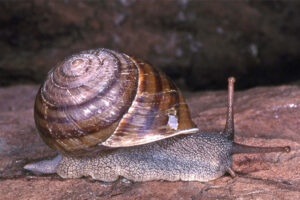 Helix pomatia is hunted in our area by hedgehogs, moles, shrews, rats and ground beetles. That is why, when organizing a snail farm, it is important to install not only a high, but also a sufficiently deep fence.

These animals have no hearing, and their eyesight, to put it mildly, is not very good. The main sense with which they move and also look for food is touch. The olfactory receptors in molluscs are located on the horns, which are essentially the nose.

The snail nervous system consists of 20 thousand neurons. Surprisingly, this is not so much (for comparison: the human nervous system has hundreds of billions of neurons). Gastropods, like other animals, are guided by instincts.

Snails in the trees

Several years ago, Japanese scientists from Tsukuba University and Hokkaido University jointly decided to conduct a study. The goal was this: to find out why it is in the spring that mollusks get out of wet foliage and climb higher up the trees. Moreover, this is completely not characteristic of these animals, because instead of moisture and shade, they spend enough time in a sunlit and dry area. 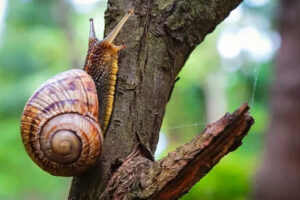 The «guinea pigs» were Euhadra brandtii sannoro, behind whom such strange behavior was noticed. These snails are common in the southern part of the Japanese island of Hokkaido. In winter, they do not hibernate, unlike our Helix pomatia (grape snails). In winter, animals crawl on fallen leaves, on the ground, but with the onset of heat they climb higher up the trees. Shellfish descend from there only in autumn.

It took scientists a long time to trace the behavior of snails at different times of the year, but all this was not in vain. As it turned out, in this way gastropods instinctively escape from beetles, which are active in the summer and eat harmless creatures. They are also hunted by rodents and raccoon dogs on the ground.

Scientists have found that the chances of a mollusk surviving on a tree are twice as high as on the earth’s surface. This is a life hack that snails use.

A logical question is brewing: what do they eat? It turns out there are no problems here either. Mosses and lichens growing on trees are fine with molluscs.

Such a feature has not yet been noticed for grape snails living in Ukraine, although perhaps it would also be useful for our gastropods to adopt the experience of their Japanese friends.