> Information > WHAT SNAILS TO CHOOSE FOR BREEDING?

An unusual business has been flourishing in Ukraine for several years — edible snail breeding. Our shellfish are supplied to European countries, whose inhabitants cannot imagine their diet without this product.

Gastropod meat is prized for its high protein content, which is easy to digest. It is low in fat, and the set of useful amino acids and trace elements is surprising. Snails are introduced into the diet for cardiovascular diseases, problems with the gastrointestinal tract, and are recommended for pregnant and lactating women.

However, not all shellfish are edible. On farms, the genus Helix is ​​bred for culinary purposes, and Achatina fulica for cosmetic purposes, which will be discussed in this article.

These gastropods of the Helicide family are a large group of land snails. As studies show, they have existed since the Oligocene era, which began 33.9 million years ago! Scientists confirm that these animals were eaten by cavemen. 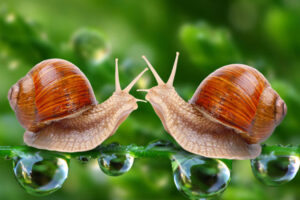 Europe and most of the Mediterranean regions are considered the homeland of the Helix. The most common representatives:

Species of this genus hibernate during the winter.

This mollusk is the largest and most widespread in Europe. In Ukraine, it lives throughout the territory, it is often found in the wild: forests, meadows, bushes, vineyards.

Grape snails are grown on many open farms. The mollusk acquires a presentation in weight of 30-45 grams. Helix pomatia grows to this size for 1.5-3 years.

Snails are unpretentious and accustomed to our climate. Their meat contains the most microelements, for which it is highly valued all over the world.

The advantage of a grape snail is an affordable price, ease of cultivation, the ability to organize breeding in open pens.

The disadvantage of such a product is a long growth period and a low price on the market compared to the Helix aspersa species.

Helix aspersa are garden (gray) snails native to the southern Mediterranean coast. Today the technology of intensive cultivation of this species on farms is used. In half a year, mollusks grow to marketable form.

In February, by gradually increasing the temperature in the greenhouse, the animals are awakened, and in March they are placed in an incubator. Animals spend April still indoors, and starting from May they are moved to open pens. 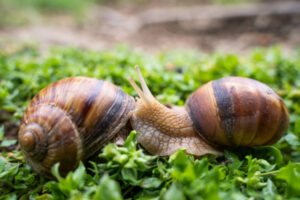 Already in October, farmers harvest crops that are suitable for sale.

An adult Helix aspersa Maxima weighs 16 to 25 grams. This species is highly fertile, laying 120-160 eggs at a time.

Helix aspersa Muller is a small gray snail. Its meat is very tasty and does not require processing, because these mollusks are cooked whole with a shell. The mass of one individual is only 6-10 grams. There are 100-120 eggs in a clutch.

The export sales value of Helix aspersa is 3.5-4.5 euros per kg, while the price of a grape snail is 1 euro.

Thus, it becomes apparent that garden molluscs are more beneficial for breeding. They grow at least three times faster, bring more offspring and are more expensive.

However, there is a flip side of the coin: to open a farm for breeding Helix aspersa, you need a large start-up capital, because for these snails you need to build a greenhouse.

Grape molluscs sometimes begin to grow in the courtyard of their own private home, having collected a broodstock in the wild. The process takes a long time, but on the other hand, you do not risk losing money if something goes wrong.

But what about the Achatina?

The giant African Achatina is native to the African continent. She does not hibernate, since there are no such temperature changes in her homeland.

Despite the fact that Achatina fulica is edible, they are grown for cosmetic and pharmaceutical purposes. In medicine and cosmetology, snail mucus is used, which has amazing properties:

This species involves breeding only in greenhouse conditions.

As you can see, there are several breeds of snails that are profitable to breed. Having studied in more detail the information about each species, you can choose your option and successfully build your own snail business.