> Information > WHAT OTHER COUNTRIES ARE SNAILS POPULAR?

Slow unusual creatures are a world-famous delicacy. Yes, for many Ukrainians this fact is still a discovery, but in Europe, America and Asia, snails have been eaten for a long time.

Interestingly, in ancient times, shellfish were by no means considered something delicious. On the contrary, they were perceived as food for the poor. After all, animals do not need to be raised. I went to the nearest forest, gathered a «crop», cooked it. Due to the high protein content, such food provided satiety for a long time.

Scientists found empty shells of gastropods in the caves of primitive people. Snails were eaten in ancient Rome, sailors in the Middle Ages pickled them and took them with them on a voyage, and monks were allowed to eat snails during fasting.

Later, world-renowned chefs began to experiment with snail meat. Frenchman Marie-Antoine Karem became the author of the most famous snack in the world — escargot (fr. Escargots à la bourguignonne). The dish became popular after a dinner party in 1814, where the Emperor Alexander I. tasted snails in this performance.

By far the French are the biggest fans of shellfish. Every year 40 thousand tons of snails are eaten here! Traditionally, gastropod dishes are considered festive and must be present at the feast (especially during the Christmas period).

The escargot is considered the culinary king. Every year on May 24, the French celebrate National Escargot Day. It is easy to guess what kind of appetizer is served at the table.

A few words about her. This is a snail fillet that is baked in a delicate creamy sauce right in the shells and served hot. Garlic and herbs add spice to the dish. There are special dishes for escargot: a plate with grooves (so that the shells hold tightly) and a small fork with two prongs. 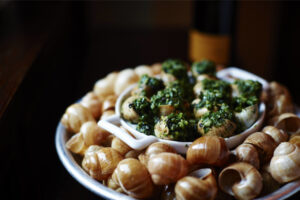 The appetizer is served with dry white wine (chilled) and a baguette. With a fork, remove the fillet from the shell, and then soak the rest of the sauce with bread.

Over the years, several variations of escargot have appeared: Limousine (with ground nuts and breadcrumbs), Dijon (with Dijon mustard), Saffron (with saffron spice). But still the most popular is the classic recipe — Burgundy escargot.

Where else are snails eaten?

In Italy, in the city of Cherasco (Piedmont), the festival of snails (Festival della Lumaca) is held annually. At the festival, which lasts four days (traditionally at the end of September), a variety of gastropod dishes are served: pate, shashlik, pasta with snail sauce. The festival is accompanied by themed advertising posters, booklets, street statues and custom-made souvenirs.

Also in Campania in the south of the country, at the end of November, they organize a snail fair with tastings and reports on the topic of heliculture and new gastronomic trends from snail meat.

In Barcelona, a major city in Spain, waiters most often offer shellfish (Spanish caracoles) as an appetizer. Snails are added to the most famous Spanish dish — paella. They also like to stew gastropods in tomato sauce.

Crete, the largest island in Greece, has the most snail lovers among the Greeks. Here they are fried, baked on coals, pies and cabbage rolls stuffed with shellfish and other interesting dishes are made.

In addition to Europeans, Americans are no less fans of snails. Although the residents of the United States have an ambiguous relationship with these animals. For example, the breeding of giant African Achatina is prohibited ($ 5,000 fine). This is because they are considered pests of agricultural crops, as well as destroyers of houses (replenishing calcium reserves, Achatina eat whitewash). 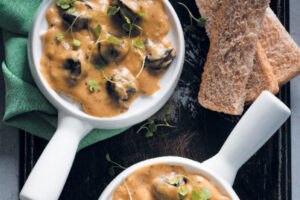 In some Asian countries, snails are also very popular. Here they are pickled or stewed with a side dish, adding hot spices.

Countries such as Bulgaria, Romania, Serbia and Poland are considered the largest suppliers. Snails are also grown in China, but little is consumed in food.

Of course, shellfish dishes are not yet so popular in Ukraine. Perhaps it is a matter of time, and one day snacks with an unusual ingredient will become not exclusive, but familiar food for our residents. In the meantime, we are making progress in growing snails, and this cannot but rejoice.