> Information > What is the difference between French and other receipts of snails?

The French are big amateurs of snails. Demand for shellfish in this country is higher than in all other European countries. The famous, juicy and delicious Burgundy snails also came from a French province Burgundy.

Baked shellfish are called escargot. But not all escargot recipes were invented by the French. Nowadays the snails are popular all over the world, so this dish is prepared differently and each country brings its own peculiarity to the delicacy. What is the uniqueness of the original French recipes?

Alcohol is an indispensable component in delicacies from France. Wine is traditionally added, but cognac or other strong drinks can also be used.

In the classic escargot recipe, snail meat is cooked in white dry wine. The final taste of the dish greatly depends on the quality of the wine. This cooking step is also often used in other variations of escargot.

It is interesting that just a couple of drops of an alcoholic beverage transform a dish, therefore chefs often experiment by replacing one type of wine with another or changing the proportions of components. The French say that white wine is a classic of snail delicacy, so a red one cannot be combined with shellfish.

Many herbs are used 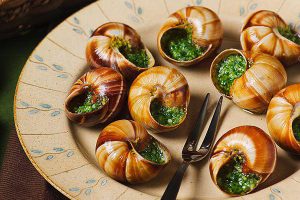 Herbs are also a highlight of French cuisine. Spices are particularly appreciated in the South of France. So, the famous Provincial herbs are used in many dishes that the French eat every day.

A mixture of herbs, rosemary, peppermint and parsley, gives more than just a pleasant smell. They are able to reveal the taste of snail meat from a completely different perspective. The classic escargot recipe requires parsley and garlic, but if you just replace the parsley with another spice, the dish will be perceived differently.

Herbs make French cuisine extremely difficult. Just one pinch of aromatic mixture will change the recipe. However, the famous chefs know how to manage them, and therefore France is the motherland of the most unusual and exquisite dishes.

It is noteworthy that the recipes from this country are very simple: preparation of escargot, requires snail’s meat and a couple of components for the sauce.

Serving dishes is as important as their taste

The appearance of dishes is another peculiarity of French dishes. French are able to serve an omelet to the Queen, so serving snails is not a problem.

French escargot cannot be ugly and shapeless. The dish is a masterpiece. Baked mollusks are served with fresh green herbs, on a big plate with a thin sauce pattern. They are poured with melted cheese and are served right in shell with special devices. A glass of wine adds the delicacy.

The French like unusual combination of food, seafood and sauces. It is worth tasting at least once!