> Information > WHAT IS THE BENEFIT OF SNAIL MEAT?

Just 10-15 years ago, a snail in Ukraine was considered exclusively a garden pest and just a strange slow creature found in nature. Today the situation has changed dramatically.

Despite the fact that the popularization of this product in our country has not yet fully developed, many Ukrainians already know that shellfish are a very useful dietary product, a delicacy. Dozens of farmers saw snails as a profitable way of earning money and opened farms for growing them.

Why there is such a stir around gastropod meat and for what reason snail dishes are so popular in Europe, we will tell in this article.

A bit of history

During excavations in the caves of primitive people, archaeologists often found empty shells. This indicates that even in ancient times the snail saved people from hunger, giving them strength and quick satiety. The oldest shells discovered in the course of research are 30 thousand years old. 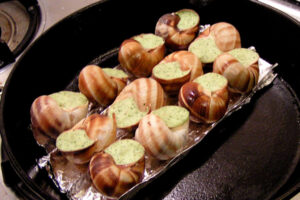 In ancient Rome, traditional healers have already learned about the amazing properties of snail meat. The Romans built a beautiful body into a cult, so a protein product that gives muscle relief and regulates digestion was regularly on the table.

In ancient Greece, mollusks were generally considered messengers of the gods. Crawling out en masse in early autumn, when the weather became wetter and cooler, for the Greeks, snails were an indicator of the beginning of the harvest.

In 77, in the works of the ancient Roman erudite writer Pliny the Elder («Natural History»), mentions were found about the recommendations of a snail diet for gastrointestinal diseases.

The sailors marinated shellfish meat on the voyage, which was stored for a long time and provided strength during difficult work.

The only fact that has changed since then is that in the old days, gastropods were an affordable product and were considered food for the poor. Now the situation has changed. Snails are recognized as a delicacy. Even in France, dishes made from this meat are eaten only on holidays.

Every year on May 24, the French celebrate Escargot Day. Stuffed clams are considered the most delicious and popular snack in the world.

The benefits of snail meat

Snail fillet is a unique product. Its calorie content is only 90 kcal per 100 grams, and the amount of protein is huge — 16 grams (more than in a chicken egg). Moreover, this protein is easily digested.

At the same time, there is very little fat — 1.4 g, so snail meat is considered dietary.

In addition to these properties, it has a set of vitamins and minerals:

Regular use of this product improves skin condition, improves the functioning of the gastrointestinal tract, normalizes the vitamin and mineral balance, and helps to reduce blood cholesterol levels.

An additional bonus is the hypoallergenicity of the product. Therefore, gastropods can be eaten by absolutely everyone.

Nutritionists especially recommend regularly introducing dishes with this ingredient into the diet:

Snail meat, which benefits are described in many sources, is also a universal product. It is grilled, baked, stewed, added to vegetable stews and soups.

Paella with snails and fillet stew in tomato are popular in Spain. In France, as already mentioned, there is a cult of the escargot appetizer (meat is baked in a creamy sauce right in the shells). On the streets of Morocco, snails are boiled in a spicy broth and served as a soup (a popular street food). In America, they are grilled, and the Greeks love to add gastropods to salads.

Ukrainian restaurants do not yet have such a variety of dishes made from this healthy product. However, to appreciate the taste, it is enough to taste the escargot, which has already appeared not only in gastronomic establishments, but also on the shelves of large supermarkets in frozen form.

Be sure to try the snail dishes. This unusual dietary product will not leave you indifferent.