> Information > THE REALTION OF SNAILS TO THE RESTAURANT BUSINESS

Dishes from snails are an inevitable menu of many European restaurants. They are considered delicacies and every restaurant has its cooking secrets.

The most popular dishes

Hot snack escargot is the most popular dish. This is a snail fillet in a creamy sauce, white dry wine and garlic, which is served in the shall. Special utensil for serving is an escarging dish (a plate with holes for 12 or 24 pieces), tweezers to hold the shall and a fork to remove a tender aromatic meat.

In small street cafes offer a wooden skewer and the dish is served on a plate.

Burgundy escargo recipe is a classic one. It received its title in honor of the Burgundy snails. Burgundy is a former region in the East of France. The most delicious and selected mollusks were collected there.

There are also other variations of this dish:

In the late spring and summer during the holidays, the French often order grilled snails (grilles) or shellfish cooked in a burning cognac (flambés).

In Alsace (Northeastern France), tender meat is stewed with shallots in white wine.

In general, the French can not imagine a snail without wine. Be sure to seve the snack with a glass of well-chilled white dry noble drink, such as Muscadet, Saumur sec, Riesling, Tokay, Chablis, etc.

Influence of the cuisines of other snails

The Europeans have recently become more open to new tates and experiments. Migration has a considerable impact, because the representatives of other countries contributed to the diversity of classic receipts.

These dishes can be found in the institutions of migrant quarters or in cafes, the owners of which decided to diversify their menu.

Our country is still exploring an exotic product, but this process is rapid enough. Over the past five years, the domestic market’s demand for snail meat has grown more than a hundred times!

Many Ukrainian restaurants serving European cuisine made shellfish dishes. The chefs took a chance and began to popularize French dishes. The gourmets have already appreciated them.

So far, mainly escargos can be found on the menu. The appetizer is made from grape snails, which are bred in our country. 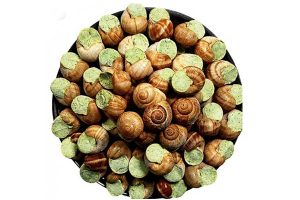 In recent years, many breeding farms have been initiated. In addition to grape, the following species are grown: Achatina fulica (giant African achatina), Aspersa Maxima and Aspersa Muller (varieties of garden snails).

Also, gastropod caviar is considered an expensive gourmet delicacy. It is served on toasts with martini or champagne. The caviar eggs look like little white pearls. To taste, they are compared with a noble porcini mushroom. French connoisseurs call this appetizer «forest pearls.»

Unfortunately, this delicacy is not popularized in our country. Its cost is about 250 euros per 100 grams. However, Ukrainians have recently become so acquainted with unusual dishes that it is quite possible to see caviar in the menu of prestigious institutions in large cities in a couple of years.

If you are the owner or a cook of the Restaurant of European cuisine, add snails’ dishes to the menu!

The workers may not ne obviously trained the complete preparation process. There are companies, delivering frozen or semi products. The preparation may take only 10 minutes!