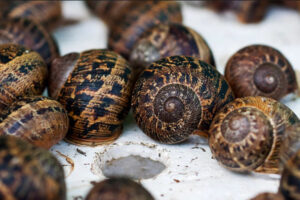 Growing snails is no longer an exotic type of animal husbandry for Ukraine, but a profitable business that attracts investors every year. The favorable climate, high-quality black soil and the hard work of the inhabitants of our country bear fruit in the form of a good snail harvest.The domestic sales market is not yet developed as much as farmers would like, but the trend is towards the fact that delicious and healthy shellfish dishes will soon be presented in the menu of most restaurants and cafes. At the same time, according to economic studies, the global demand for shellfish is covered by no more than 70%. European countries (France, Italy, Spain) and Asia are considered the record-holders in the consumption of snail meat. Several Ukrainian farms have already been certified for wholesale supplies to Europe, and their number is growing every year. In this article we will talk about how the process of ordering and delivering wholesale lots of gastropods takes place .

Active negotiations between potential customers and suppliers usually take place at the end or at the beginning of the year. Europeans, as a rule, are quite satisfied with the price of Ukrainian snails, so they pay attention to another important aspect — quality. First of all, the presence of an international certificate confirming the right to sell abroad is checked. Then the terms and conditions of delivery, price and other points are discussed. Often a customer’s representative comes to Ukraine to visit the farm, see the growing conditions, and communicate with the owner directly. Then comes the stage of concluding an international contract. Sometimes Europeans start by ordering a so-called «trial» batch to make sure the quality of the product, compliance with the conditions of procurement, storage and transportation.

Farmers always count on a “crop” with a margin in case of increased mortality or culling. From the remainder of the snails, a broodstock is formed for the next season, as well as small batches for sale to the domestic market.

The Helix aspersa type is the most popular for breeding: 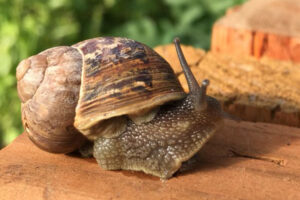 Such molluscs grow to marketable size in just 6 months, while grape (Helix pomatia) — in a year and a half. Helix aspersa Maxima and Helix aspersa Muller are considered to be tastier, therefore they are valued higher in the market. However, they need greenhouse conditions. Harvesting begins in August-September. The snails are harvested by hand and then prepared for shipment. This important process includes the following steps:

The taste of the mollusk directly depends on the first point. In order for the snail to cleanse itself from the inside, it is enough to let it starve for 3-4 days. During washing, excess mucus and dirt (including excrement) is removed, and when sorting gastropods, they are laid out on:

Further, before freezing, the mollusks are carefully dried, folded into bags and sent to the freezer with a temperature of -18 ° C. Important! In order to preserve the beneficial substances and taste as much as possible, the freezing process must take place in a short period of time (by the shock method).

After being ready to ship the cargo, the snails are packed in boxes (approximately 3-4 kg each). The shellfish are transported in special refrigerated vehicles, where the optimum temperature is constantly maintained. The boxes in the car are placed on wooden pallets with ventilation openings, since it is important to ensure air circulation. The cargo must be transported carefully. Despite the tightness of the packing, the shells of animals may be damaged, and this defect is considered the fault of the supplier (in the case of the prescribed conditions of Incoterms, where the seller is responsible for the entire time of transportation). After delivery of the cargo, the customer’s representative inspects it, organizes unloading and transfer to their freezers. The acceptance certificate is signed, and from this moment the batch is considered delivered to the buyer. Then, within the period specified in the contract, the final payments for the products are made.