> Information > TEETH, LEGS AND EYES - HOW CREATED THE SNAIL

Snails are amazing creatures! They have a skeleton outside, eyes on the horns, and only one leg. The name of the class of gastropods to which the animal belongs came from latin after the merger of two words: 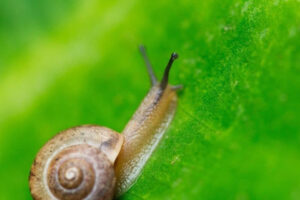 The term «snail» itself originated from the Old Slavic adjective «ulit», which translates as «hollow», characterizing the house of the mollusk.

Snails are often kept as pets. Animals are unpretentious and do not require complex care. Basically, the giant African Achatina (Achatina fulica) is chosen for these purposes. Adults barely fit in the male palm.

The question of the structure of the gastropod mollusk arises more often in curious children. But sometimes adults themselves wonder how this strange animal is arranged.

The snail’s body is soft and tender. It would seem, where are the teeth from? But the owners are surprised to see how the pet gnaws a calcium stone or (which, of course, is not very good) a neighbor’s shell.

In the evening, when the mollusk becomes more active, characteristic “chewing” sounds are heard in the silence. This sometimes even scares those who have just started an animal.

So there you go! The snail’s not just have teeth, there are an incredible number of them! The common grape Helix pomatia has more teeth than the shark — up to 25,000. All of them are located in the radula (tongue). This is a special organ that consists of cartilaginous tissue that resembles a fine grater. It is with it that the mollusk grinds food: hard plants, calcium, hard fruits.

Despite the fact that most representatives of the animal world have teeth divided into certain groups, they are all the same in snails.

Snails have poor eyesight. They distinguish between light and darkness well, react to flashes, but at the same time they see no further than a few centimeters. This moment is compensated by a developed sense of touch and smell, which helps to find food and navigate in space.

The eyes are located on movable horns. Thousands of hypersensitive cells form the lens, which is attached to the optic nerve. Animals have a limited viewing angle, so the horns allow them to look in different directions.

Rather, the leg which the animal moves with. During movement, the sole makes wave-like movements, contracting the muscles in turn. Due to the secretion of mucus, friction is reduced and gliding becomes better. So the snail does not hurt the delicate body on rough surfaces. Even putting a mollusk on the knife blade, you will see that it will remain unharmed (but it is better to take our word for it and not conduct such an experiment)).

What’s inside the sink?

The shell of the mollusk performs the following functions:

Achatina shells are very durable. The hotter and drier the climate, the thicker the house will be.

Inside the shell are located:

Many kids ask if a snail has a brain? Yes, it is the cerebral ganglion, which is a collection of nerve cells. But it is, of course, in the head.

Now you know the answer to the question of how a snail is arranged, so you can get to know your gastropod friend a little closer.