Breeding snails is called heliceculture. Such a business has been engaged in in Europe for a long time, but here, in Ukraine, it is only developing, but it is happening by leaps and bounds.

The first snail farms appeared in our country literally 10 years ago. And already in 2016, the export of snails exceeded in quantity the most important Ukrainian product — lard.

Enterprising Ukrainians quickly realized that among all spheres of animal husbandry, heliceculture is the most profitable. At the same time, you can start a business practically from scratch, and the risks are minimized. So the snail boom spread throughout the territory, and now shellfish are grown in almost all cities of Ukraine.

A grape snail is suitable for breeding in pens. 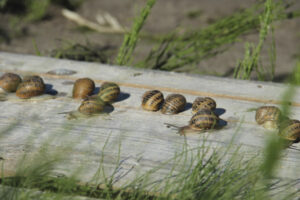 This is a mollusk that lives in our zone and is accustomed to the climate of Ukraine. In winter, snails hibernate, burrowing deep into the ground. In the spring, with the onset of warmth, they come out of suspended animation. Crawling to the surface, animals replenish their bodies with lost reserves, gain weight and begin to reproduce.

The open-farm season runs from April to October, but it all depends on the natural conditions. Molluscs may wake up later if the winter drags on, and fall asleep earlier (if the frost occurs earlier than usual).

In order to organize a corral, you need:

The size of the plot depends solely on the financial capabilities of the owner and the scale of the planned business. This can be either a part of a vegetable garden near a private house, or a large piece of land of several hectares.

An outdoor farm has the significant advantage that equipment costs are relatively low. The only thing that is desirable to buy from technology is an irrigation system. You can also water the snails by hand on hot days, but it will greatly facilitate the farmer’s lot.

Disadvantages: complete dependence on weather conditions. Heat and drought are natural enemies of shellfish. In such weather, they reproduce reluctantly and may even fall into temporary hibernation.

You also need to be careful about protection. Snails are a delicacy for hedgehogs, moles, birds of prey and other animals.

An expensive but more reliable method of growing is indoor. This should be a room with utilities and climatic equipment. For active growth, it is important to maintain optimal temperature and humidity parameters. For each type of snail, the indicators are different.

In greenhouses, garden snails (Helix aspersa Maxima, Helix aspersa Muller) are mainly grown, which are valued higher for their taste and, accordingly, are more expensive. 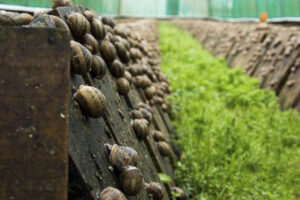 The closed method requires serious investment, even if its scale is small.

It should be noted that the aerobatics of the snail breeding business is an established processing line. So far, such a niche is free in Ukraine. Our shellfish are sold to Europe, where in Poland, Bulgaria, Romania they are prepared for export to countries where the number of snail meat fans is maximum (France, Italy, Spain, Greece).

But even whole frozen snails are in high demand. At the moment, there is a global shortage of this useful product, that is, it is produced less than the market is ready to accept. Therefore, if you decide to open a snail breeding business, you will definitely not go wrong. And the question of what to choose, a corral or a greenhouse, is individual and depends on many factors.