> Information > IS THE SLEEPING OF THE SNAIL ACHATINA NORMAL OR IS THIS A REASON FOR ANXIETY?

Giant Achatina (Achatina fulica) is native to African countries. Unlike our climate, it is always hot there, but there are dry periods. It is in natural conditions at this time that snails hibernate, waiting for a favorable rainy season. With its onset, a lot of juicy greens grow in nature, which the animal eats off after waking up, restoring strength and returning lost weight.

But … this story is not about home conditions. Being in a favorable environment, the mollusk, in theory, has no reason to fall into suspended animation. However, this happens periodically …

What does cause Achatina hibernation? 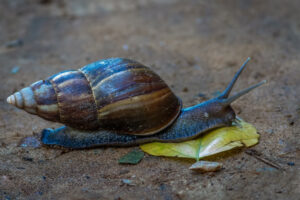 Accordingly, solving these problems will lead to the awakening of your pet.

However, how do you know when a snail is asleep?

Hibernation in Achatina is very similar to the sleep of other terrestrial gastropods, in particular Helix pomatia (grape snail).

First, the animal prepares a «den» for itself, digging deeper into the ground. Hiding completely in the shell, it closes the entrance with a protective film called the epiphragm. This is a mixture of thick mucus with protein and calcium compounds, which is produced by the mollusk itself. After drying, the epiphragm becomes hard and dense, reliably protecting the mouth of the shell. There is always a hole on the surface of the film for air intake.

How to deliberately put a snail in suspended animation?

Sometimes snail breeders have to put pets into hibernation in order to calmly set off on departure. Yes, a snail can survive without food and water without any problems while you are on vacation. But this should not be abused in any way!

Before leaving, make sure a film has formed at the base of the shell.

Waking up after hibernation

After you returned home, Achatina must be woken up. These snails are sleepyheads, so they will not rush to get out of hibernation on their own. And prolonged suspended animation is dangerous for animals. 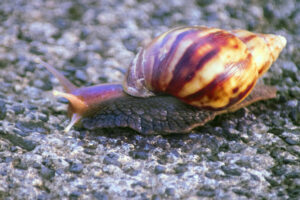 Important! The maximum duration of hibernation is 3 weeks. But this figure is individual. It may be harmful for your pet to sleep even 2 weeks. How to determine this? If the epiphragm begins to dry out strongly and be drawn in, it means that the mollusk must be urgently awakened.

Now gently water the snail shells with warm water until it wakes up.

Molluscs lose a lot of energy during suspended animation, so it is important to feed them nutritious foods in the first couple of weeks after waking up and do not forget to top up the water.