> Information > HOW MUCH ARE SNAILS SLEEPING? STANDARDS AND DANGEROUS DEVIATIONS

Achatina snails, which are most often raised from mollusks as pets, do not hibernate. They do not need to wait out the cold, because Achatina fulica comes from Africa. In nature, mollusks can go into suspended animation only during the dry season. But in molluscs, where conditions are favorable for them, long sleep does not occur.

As a restorer of strength, these animals, like the rest of the fauna, choose daily rest.

Snails are nocturnal creatures, so there is no need to worry about the mollusk being inactive all day. But in the evening, when all family members go to bed, a «movement» begins in the mollusc. After waking up, the hungry pet begins to crawl in search of food. And in the morning, the owners can find the Achatina on the top lid or on the walls of the aquarium, and possibly even outside it (if the holes allow it to escape).

How long do snails sleep normally?

The average duration of daily sleep under favorable conditions is 8-12 hours. Snails love to sleep by burying themselves in moist soil and hiding in a shell. 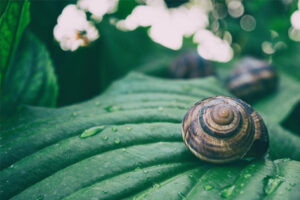 It is in the ground that there is a frequent problem of anxiety and prolonged wakefulness of the mollusk. If it is too wet or, conversely, dry, the pet will be uncomfortable. Also, a possible cause is the presence of harmful bacteria or mold. If you have any doubts, remove the soil from half of the bottom of the shellfish. Does a snail nest on a bare surface? Replace or moisten the soil.

Shellfish love cleanliness. Do not allow the house to get dirty so that the pet is as comfortable as possible in it.

Thus, we smoothly approached the first deviation — insufficient sleep or complete absence for a long time. But this does not mean that you need to be alarmed if you find your pet awake during the day. Snails wake up for a snack or a walk. But if you see obvious concern, then you should think about what is wrong.

There is another extreme — suspended animation.

If suddenly the mollusk is in the same position for a long time, take a closer look at the base of the shell. Do you see the formed film covering the entrance to the shell? It means that something went wrong, and the snail plunged into suspended animation. 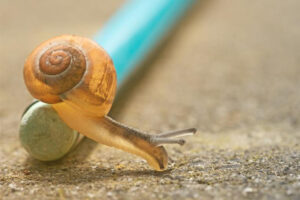 There can be many reasons for this:

Correcting a negative scenario is a mandatory component of removing Achatina from hibernation. After tidying up the house, gently sprinkle the clam with warm water on the shell. When the snail wakes up, it checks to see if what prompted it to fall asleep has been corrected (in case of illness, consult your veterinarian).

So, the second extreme (deviation from the norm) is a prolonged sleep with the formation of an epiphragm (the same protective film).

To summarize: snails (like all living things) must sleep. But normally, mollusks wake up every day, eat, drink water and explore the world around them. Both too short sleep (or lack of it) and prolonged sleep (suspended animation) signal that something is wrong with the animal. Make every effort to keep your pet comfortable in your home. After all, we are responsible for those we have tamed!