> Information > HOW DOES THE SNAIL BREED?

Terrestrial gastropods, land snails belong, are amazing creatures with a very interesting way of breeding. The main distinguishing feature of these animals is that they are hermaphrodites. This means that each individual often brings offspring. This trait is one of the biggest advantage when breeding snails: unlike those animals where there is a division into females and males, all mollusks in the livestock lay eggs. 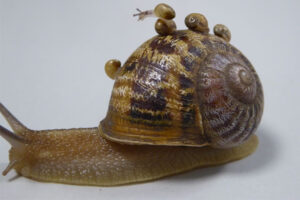 At the age of 8-9 months, gastropods are already ready for the mating process. Garden snails (Helix aspersa Maxima and Helix aspersa Muller), which are in high demand in the gastronomic market, reach their breeding point even earlier — at about 6 months. Snails usually breed in the spring, after waking up. First, they gain strength, regaining lost weight, and then move on to finding a partner. Achatina, which do not sleep in the cold season, can produce offspring at any time. By looking closely at the animal, puberty can be easily determined. The reproductive organ is located on the neck and is a small white bump to the right of the head. In zoology, the concept of «arrow of love» is often applied to him. The behavior of the animal also changes. The snail crawls, periodically stopping and strongly stretching its neck. Thus, the mollusk seeks and attracts a partner.

After a successful meeting, the courtship stage begins. Both snails stretch upwards opposite each other and touch with tentacles. Then the pair is joined by the soles. The snail heads are also pinned down. At this moment, there is a release of mucus and contact with the genitals, which are rapidly increasing in size. This is followed by an exchange of “arrows of love”. Scientists describe them as plates of lime that stimulate reproduction. At the peak of arousal, male germ cells are transmitted to each other. The most interesting thing is that the mollusks change the roles of the female and the male already in the process. The copulatory organ then goes deep into the depths, forming a funnel, then stretches out. Specifically, this process lasts a few minutes, and the entire sexual intercourse — up to two hours. After the exchange of smermatophores, the exhausted animals slowly disperse. 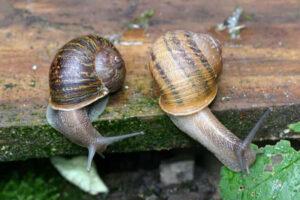 After fertilization, an egg capsule (special shell) is formed in the body of the mollusk, which dissolves during the laying process. The timing of pregnancy is different for different species of snails. Average duration is 2 weeks. Snails lay their eggs in the ground, digging a hole 5-7 cm deep. The egg-laying organ is the same white tubercle on the neck. The record holder for the number of eggs is Helix aspersa Maxima (up to 160 eggs in one clutch). Helix aspersa Muller yields 100-120 eggs, and Helix pomatia only 50-70. Development of eggs underground lasts 2-4 weeks. Having hatched, the small snail eats the remains of the shell and begins to slowly but independently get out. The process of emerging to the surface takes a long time — 8-10 days. All this time, microorganisms that are contained in the soil serve as food. Therefore, it is important to intensively fertilize the land where the mollusks lay their eggs. Note. Snail caviar is a delicacy not only for humans, but also for predators. Natural enemies of the offspring of gastropods are shrews, moles, lizards. Therefore, the first rule when organizing a farm is to install a deep-dug fence.

To avoid mortality, it is important to maintain optimal temperature and humidity conditions in the shellfish or on the farm. The soil where the eggs are buried must be moderately moist. It is dangerous not only to dry out, but also to swamp the soil. Sometimes empty eggs are found in the clutch (this is about a quarter of the offspring). The normal color of the eggs is milky white. If you see a blue tint, then the fruit inside is frozen. It is undesirable to disturb and transfer the masonry. It so happens that the snail does not bury the eggs, leaving them on the surface. Often this story happens with aquarium Achatina. In this case, make a small hole yourself and cover the eggs on top with earth. Proper care ensures the birth of healthy offspring.