> Information > CAN A SNAIL SURVIVE WITHOUT ITS SHELL?

When it comes to a snail, the first association that arises in the head is a funny animal with horns and a shell on top. Indeed, the shell is a mandatory attribute of gastropods (class Gastropoda).

Let’s immediately answer the question of the title of the article: a snail cannot survive completely without a house! In order to understand why the shell is so important for these molluscs, consider what functions it has for crawling creatures.

How does the shell appear and what does it matter

Snails are born with a house. In babies, it is transparent and soft, but as it grows, the shell becomes stronger. The giant African Achatina, which they love to have as pets, is very strong!

The shell is called the external skeleton of the molluscs. It is like a litmus test, can say a lot about the health of the owner.

The mantle takes part in the formation of the shell (a skin fold, the edge of which is adjacent to the lower part of the house). There the circular layers are deposited, which form the growth rings. 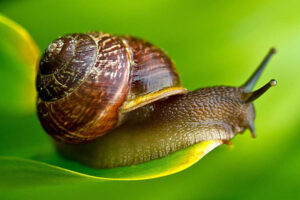 The shell performs the following functions:

Considering the third point, it becomes clear: even if you completely protect the mollusk from possible troubles, create ideal temperature conditions, then the snail simply will not be able to move and will die.

Falling out of the shell. What are the reasons and are there any chances of survival?

An animal will never voluntarily lose its house. But, unfortunately, there are times when the mollusk falls out of the shell. Possible reasons for this trouble:

Only the last item cannot be influenced by the pet owner. But you definitely need to pay attention to the first three. It is much easier to prevent a problem than to solve it.

But if, nevertheless, for some reason this happened, it is important to adhere to the following algorithm of actions:

If the snail has adhered to the walls of the shell, then it is likely that later it will be able to completely return to its place on its own.

In order to kill bacteria, a disinfectant solution is prepared: ½ a metronidazole tablet is dissolved in half a glass of boiled warm water. The mollusk is gently dipped into this solution for literally 1 minute.

After «resuscitation», the snail is kept in a separate aquarium, at the bottom of which a damp towel is placed, and an additional amount of feeding is provided.

Important! Do not lift the animal by the shell, as weakened muscles may not be able to withstand the load.

Chips and cracks on the shell — is it dangerous?

If you notice damage on the shell, most likely the pet fell from the wall. In this case, also place the snail in a separate aquarium and allow time. Calcified food will help him recover.

There are many tips on the Internet for «gluing» the shell, but we consider the safest method of tightening the chip using a film from a boiled egg, which is located between the shell and the egg.

After providing emergency assistance, in any case, it does not hurt to contact the vet!