> Information > How to eat snails

Snails are ancient creatures that can be found in many periods of human history. Evidence of the existence of snails was discovered many centuries ago during excavations and studies conducted in the territories of various countries. Trying to survive, people tried to eat a variety of plants and animals inhabited their area, so snails were the food of people living on the shores of the Mediterranean Sea, central and Western Europe and other countries with suitable conditions for mollusks.

Quite recently, in 2011, the research conducted in Cova de la Barriada in Benidorm, Spain demonstrated that about 1500 snail shells were found, which showed that they were subjected to heat treatment.

The shells, found in layers of sedimentary rocks indicate that people used snails for food 30,000 years ago. The analysis of found shells shows these were adults of snails of Iberus alonensis. Moreover, the analysis has proven that snails had been browned at high temperature on pine and juniper wood. Scientists consider it as irrefutable evidence of the use of invertebrates for food by people in the early Paleolithic period in the Mediterranean basin.

Edible snails have been consumed by people. Mollusks are a very important component of the predators food chain, mammals, and some rodents, hedgehogs and birds. Predatory relatives consume snails of the Helix type. Such species as Euglandina rosea and Rumina decollata have grape, garden and giant African snails for food. These are invasive species that have been used by humans as a means of biological control over the distribution of mollusks, slugs and their eggs. With their help, people control the number of herbivorous mollusks, which are malicious agricultural pests. The love of a delicate shellfish has led to the threat of the disappearance of certain types of fruits and vineyards. Therefore, some countries have applied such control measures over their numbers.

How to eat snails Bourgogne? 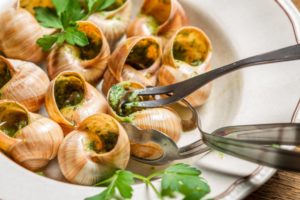 The shellfish, as a delicacy is gaining its gastronomic fans around the world. For several centuries, Helix Pomatia was considered a food of the poor, but during the Renaissance it gained popularity among the nobles and rich people. Today many elite restaurants in Europe serve French delicacy — an escargot «in Burgundy». It is considered an excellent snack for wine, while special devices have been also invented for the convenience of consumption.

France is not the main consumer of edible snails. Today, like 30,000 years ago, snails are consumed by people along the Mediterranean coast. Some provinces of Italy and Spain consider mollusks their national dish.

How to eat snails at restaurants and why to use tongs?

Recipes for the preparation of shellfish and the customs of their eating are different in diverse countries. Thus, the French use special plate for serving escargot and special plate with depressions for the shells. 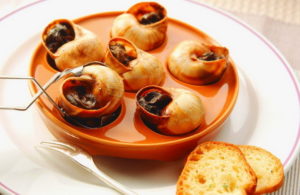 Devices, served to eat for escargo are fork with two teeth and tongs. The tongs helps take the shell, while fork helps extract meat from it carefully. In Spain, dishes cooked from shellfish are served with an empty saucer and toothpicks.

They prefer Helix Aspersa Muller, but they are convenient to eat with a fork. Therefore, mollusks are more often taken with hands.

Which wine suits the snails?

Escargot or canned snails are perfect snacks or aperitif. Most often they are served to dry white wine. A light sour of white young wine slightly muffles the creamy taste of butter and emphasizes the spicy forest notes of the unique taste of snail meat.

This combination of flavors is more common in France.

The Spanish prepare snails in sauces with various aromatic spices, herbs and tomatoes, adding chili pepper. Such dishes are more pleasant to eat with a refreshing, cold beer. Therefore, it is often served to accompany piquant snails.

In France, fine wines are served with snails baked with butter. In Spain, snails are considered a family dish, prepared for a large company and served with beer. In Italy and Greece, there are other traditions associated with shellfish preparation. Therefore, you can choose your own traditions of serving and eating snails.