Grape snail has several names. Scientific classification calls it Helix pomatia, while cooks know it as escargot. This is the hugest grape snail that has spread over Europe, except its Northern part. It can be also found in the region of the Baltic sea.

What is the area of habitat of the grape snail?

In nature, the habitats of the escargo are numerous. These amazing creatures survive in the land and in the water, but prefer a moist soil with an abundance of greenery. In addition, there are many mollusks where the soil is chalky, limestone, since it  contains a lot of calcium useful for strengthening the shell

What is the most suitable climate for Helix pomatia? 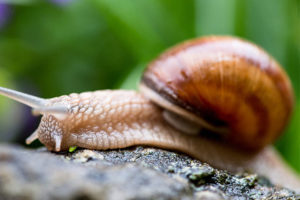 Escargo is awaken at a temperature of 7 degrees. When it gets lower, they burrow into the ground by 30 cm and fall into anabiosis. They use the same technique in the dry season. Snails can continue livelihoods, feed and breed in a humid climate with an average temperature.

On average, the maximum period of anabiosis of mollusks is 3 months (90 days). But in some habitats (for example, Belarus), it increases to 5 months. When wintering for less than two months, grape snails can function, but their fertility decreases significantly.

How long do the snails live? 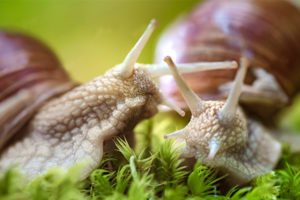 In the wild, if it is not eaten by a predator, Helix pomatia can live to twenty years. But on average, the life span of a snail in nature does not exceed eight years. At the same time, snails, surrounded by care and attention from the owner, live longer. The most famous record is 30 years. Why is there such a big difference? Escargot has many enemies

Grape snails are remarkable for their adaptability to different conditions due to their protective mechanisms:

Food of the grape snails

Helix pomatia is a herbivore, but not a picky animal. It can eat live vegetation and plant residues. It prefers cabbage, because it is a garden pest. In addition, it can be fed with

The grape snail cannot chew, it grinds food with thousands of its small teeth, like a grater. In order to replenish calcium in the body, mollusks can eat the soil (this phenomenon is especially observed in young Escargots who recently hatched from an egg). Rarely, snails still eat food of animal origin.

Grape snails are hermaphrodites, that is, each individual has both male and female sexual characteristics. They breed in spring and early autumn. After mating, they lay their eggs in the ground. Small mollusks hatch and live for the first time in the earth at a depth of 5-10 cm, gradually creeping up.