> Information > GRAPE SNAILS ARE TASTY AND EASY TO COOK

Grape snails are the most common type of terrestrial gastropod mollusks found in our altitudes. They can be found not only in the country, but after rain in the courtyards. Most snails can be found in the early morning, when the ground is still wet and cool.

They are exterminated in villages, as snails are considered agricultural pests. However, these small creatures can be used for the preparation of a variety of dishes, including well-known delicacies. 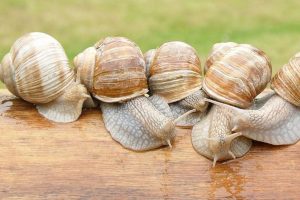 In addition to a delicate taste, snail’s meat is characterized by a high protein content, low calorie content and a large number of nutrients. It is recommended for pregnant and lactating women, as well as for dietary food.

The good news for those, who are fasting: snails’ meat is allowed during this period, when the body usually does not have enough protein of animal origin.

The process of preparation is long, but simple. It includes the following stages:

To prepare the dish from snails, one does not have to go to the restaurant. One may collect snails in forests and other territories with thick vegetation.

NB! Do not collect snails near waste treatment facilities, industrial buildings, roads and other contaminated territories.

As soon as one has collected the right amount of mollusks, they must be thoroughly washed under running water and put in a pan or other container that needs to be covered, but be sure to leave a small gap for air. At this point, make sure all snails are alive.

They should be there for three days. During this time, they do not need to be fed to make them cleaned from the inside. If the apartment is dry and hot, periodically spray them with water.

As soon as the snails are cleaned, they need to be washed again, placed in a pan, poured with clean water and put on a large fire. Remove the pan from the heat as soon as the foam appears. Water should not boil. It will help to remove the snail from the shell easily.

Now you need to separate the fillet (this is the big leg with which the clam moves). Take a sharp knife and separate the meat with one motion.

It needs to be boiled twice with onion and spices (pepper, bay leaf) for about 50 minutes. Before the second cooking, pour fresh water over it.

Where the fillet can be used?

Snail meat can be added to soup, stewed with vegetables or used to cook famous French escargo delicacy (stuffed snails). This dish looks beautiful, it has a wonderful aroma and taste, so you can safely include it in the list of holiday dishes.

For escargos, you will also need snail shells. They need to be cleaned from mucus, dipped in salted water, and dried.

Make a creamy sauce that consists of:

This is a basic sauce recipe. There are many variations of escargo, where various ingredients are added, emphasizing the exquisite taste of snails in different ways.

All components must be crushed in a blender. Then, you can proceed to the preparation of the dish. Put a little sauce on the bottom of the sshell, then put one fillet and the sauce on top again. In order for the shells to hold steady, pour salt on the bottom of the baking sheet and cover it with foil on top. The escargo is baked in the oven at 180 ° C for 10 minutes.

Serve the finished dish with a fresh white baguette.

As you can see, preparation of a restaurant dish at home is not difficult. Its cost price will be low, because the main ingredient can be easily found in natural conditions.