Although someone may consider that snails have boring life, there are many interesting and amazing facts about them:There are two hundred thousand species snails, half of them are pulmonary, terrestrial gastropods, while the rest species exist in water.

First inhabitants of the Earth

The scientists assume that snails occurred in the Cambrian period, five hundred million years ago!They are able to transmit parasites and infections, such as schistosomiasis, the most dangerous infectious form of cercaria, resulting in liver diseases, spinal cancer and brain damage.Cones are toxic and lethal to humans. The mollusk releases a poisonous harpoon, hitting and immobilizing the victim in the process of hunter. Prickly Murex has gorgeous shell with a lot of pointed spike-like branches able to damage the body if it comes to it. Alviniconcha, or punk rock snail, looks like a sea urchin. It has prickles, like cactus on its shell.

Snails are record into the Guinness Record Book of records 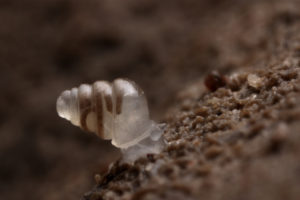 This animal belongs to the Zospeum tholussum of the Ellobiidae family. Its shell is transparent with the size of two millimeters. It also inhabits mountain caves and is totally blind, because it does not have tentacles and antennae. The biggest snail, Australian trumpeter, belongs to the Guinness Book of Records from 1979. It has an enormous weight of 18 kg, the length is 78 cm, and the volume of shell is 1.1 m. One more record holder is the African land ahatina, the body length of which reaches 39.3 cm, while its shell has 27.3 cm 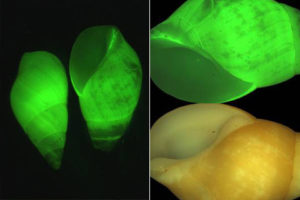 There is a common belief that fireflies exist in nature, however, little information is known about its size and color, neon — green. This kind of Hineabrasiliana luminesces lives under water and is able to create small ray of light from under its shell. The snail-worm Vermetidae is another amazing type of snails. It has an unusual type of shell in the form of calcareous tube, attached to the bottom.

The body produces special mucus, able to stick food. Although, these animals seem to be weak and small, most of them are predators, like Helena. 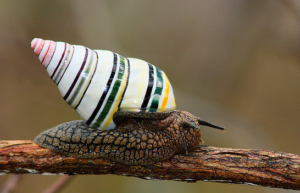 Oyster drill or Urosalpinxcinerea is bright representative of predators. It creates sulfuric acid, able to destroy the protection of other mollusks and it allows eating victims from the inside.Iridescent or Liguusvirgineus has wonderful color spectrum of the shell: from pastel white with rainbow stripes of gently pink, yellow, light purple flowers, kepelno-seromuotenku with reddish-orange spiral patterns resembling a children’s Yule. There are snails that live in the sea, they are called winged or Pteropoda mollusk. It moves, like soaring, easily flapping wing-shaped fins. Hey lack shell and inhabit cold waters of Antarctica and Arctic seas. 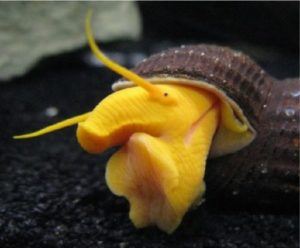 Tylomelania or «snail rabbit» is titled in this way of its similarity with the fluffy animals. This form is peculiar to several representatives; however, they have different colors. The body is yellow, like exotic fruit, black in white speckles — a beautiful sea stone, black with a yellow tint on the folds of the leg. The presence of the pronounced trunk is one more prominent features of Tylomelanii.

Snails in armors — Crysomallonsquamiferum lives in the Indian Ocean at the connection of three lithospheric plates. Iron sulphide predominates in its skeleton, while its leg and shell are covered with many plates that consist of greigite and pyrite, performing the protective function.

Some facts about grape snail 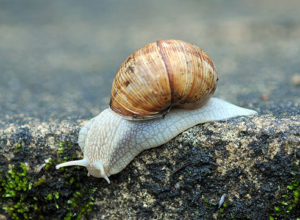 These snails deprive of the ability to hear and see, so they use touching instead. They are strictly forbidden to consume sugar and salt and absorb water through their body. The number of teeth in snails is more than in sharks. Snail’s teeth count 25 thousand, while the whale shark’s amount teaches 15 thousand teeth. Moreover, snails are able to think and made decisions and carry weight that exceeds their weight ten times. Their mucus is curative and  has protective function.