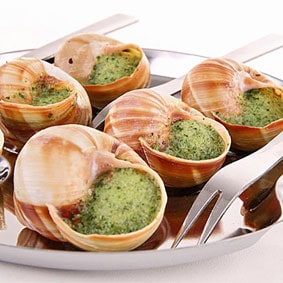 A couple of centuries ago only poor population used snails for food in some countries of Europe. Like all recipes of French cuisine, escargot bourguignon has gained its popularity among the chefs, who cook them, giving the beautiful title to the dish and adding aromatic spices to the recipe. People in Ancient Rome and Greece have known taste and medical properties of this dish. Although they were forgotten for some time, nowadays they are used as the basis for many dishes and in cosmetology.

What is the origin of the name “in Burgundy”? The story tells that in 1814, the abbot of Napoleon, Charles Maurice de Traleyrand – Perigord was going to have breakfast with Tsar Alexander I at the restaurant of one of the famous Burgundy restaurateurs Antoine Karem. They arrived too late so the breakfast has been already eaten.

The restaurateur was in despair and tried to invent some dish to impress the respected guests. So he looked through the window and saw snails. Thus, he got the idea to cook them. In order to hide the taste of snails, he added some garlic and butter to make swallowing more comfortable. The Tsar enjoyed the dish and upon his return home, he saw the same snails like and called them “Escargots de Bourgogne”. Since that time, dishes from snails have become very popular.

Today snails are prepared in France and all over the world. The elite restaurants offer tasty dishes; however, in some African countries, the snail still remains a food for the poor and is mainly used due to high content of protein.

If you want to cook tasty dish at home, there are many simple recipes. Here is a simple and fast recipe. In general, cooking of mollusks is difficult, as it requires removing intestine before cooking. Therefore, it is necessary to keep shellfish on a starvation diet for one week. To make the meat tender with pleasant, delicate taste, one can feed them with cornmeal, aromatic herbs, basil or wine, as was done in the ancient Rome.

As soon as the snails are cleared, boiled with salt, they have to be released from mucus and washed in running water several times.  Then it is essential to get rid of the shellfish from the shells and take out the intestine. Separated shells should be boiled in water with soda, and then calcined in the oven. As usual they are used to serve the dish.

How to cook escargot?

After the first preparation, cooking begins. To cook the dish for six persons, it is required to use:

For the sauce you will need:

Prepare the broth with the use of white wine, carrots, shallots, garlic, bouquet garni, salt and pepper. Include the previously cooked fillet in it and boil on a low heat during three hours. Add some water if you find it necessary. When you have boiled meat, get the mollusks out of water and cold them. Prepare the sauce, for which you softened butter, cut shallot, parsley and garlic are required. Mix everything with the butter. Then put some sauce on the bottom of the shell, put snail and cover with one layer of butter. Place the resulted dish in the oven for 10 mins. and serve hot.

There are many recipes of escargot that are cooked in similar way. The common ting is that they are used to stuff shells, but sauces can be different. It can include diverse ingredients, from garlic to loafs of ham and bacon.

Snails, prepared according to the bourgeonion recipe and escargot dishes are served in plates with the holes for shells, titled escargot saucepan. The dish is served with cutlery: tongs and a fork with two prongs. The tongs are used to take the shell, while the fork extracts the contents. They usually serve a slice of baguette with escargot and white wine.

With the augmented demand for edible snails, the farms grow different types of them. Nowadays, the most popular are Helix Pomatia, Helix aspersa Maxima, Helix Aspersa Miller and Helix Lucorum. They are cultivated in different countries, where the climate and habitat are suitable.

The variety of recipes is amazing. They include pies, soups, salads and even street food are cooked with them.

With the help of useful qualities, these mollusks are able to treat diseases of the gastrointestinal tract, lungs and the musculoskeletal system. So, if you decide to purchase this product, you will buy tasty delicacy and improve the work the whole organism.