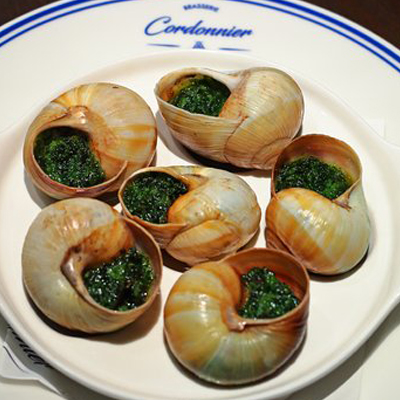 Escargots in Burgundy (French: Escargots de Bourgogne) is named after the historical region, the former region in the east of France of Burgundy. Previously it was believed that snails collected in this area are the most delicious.

The French still consider the famous appetizer a national culinary pride and prepare it for all holidays.

So, in order to cook snails in Burgundy at home, you will need: 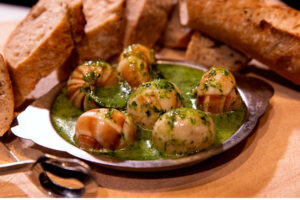 Combine the wine and water in equal proportions in a saucepan and lower the snail meat there, add salt and pepper, bring to a boil and cook for 45-50 minutes. Use only peeled and prepared farm snails!

Also in our store Snails House you can buy shells that do not need to be preliminarily cleaned of mucus and calcined in the oven.

To prepare the sauce, mix softened butter, chopped garlic and parsley with a blender. You can also add some wine to the creamy mixture. 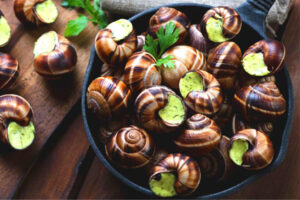 Now begin to form the dish: put the sauce on the bottom of the shell, then fillet and sauce on top again (to the brim). Preheat the oven to 200 ° C, pour salt on a baking sheet (about 2 cm layer) and cover it with foil on top. Thanks to this, the shells will be stable.

Bake the dish for 5-10 minutes (until a golden color appears on the surface) and immediately serve with a white baguette to the table. Burgundy escargots are eaten with a special fork or toothpick, soaking the rest of the sauce with bread and drinking it with chilled white wine.

If you do not have time to prepare this delicacy, you can order it ready-made frozen in our online store. To serve, it is enough to bake the snails in the oven for 7-10 minutes.