A snail has a beautiful name Helena. It sounds incredibly beautiful, but in fact it is the brightest representative of predators. This freshwater gastropod lives in Asia, to be more exact, in its southeastern part. This predator prefers heat, so the largest population can be found in Indonesia, Thailand, Malaysia.

Mollusks of this type have beautiful color of body and the shell, the length of which reaches 28 mm, while the diameter can be up to 13 mm. Spectral color balances in warm yellow tones, from lemon to amber, alternating with a spiral pattern of coffee color. The body of this snail has unusual light beige shade, mixing with gray with small impregnations, like droplets. 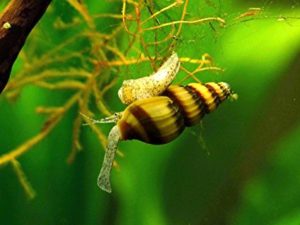 The cone-shaped shell of the predator is ribbed and spiral without the tip. However, there are other colors, which depend on the species. There is one appearance peculiarity: the presence of large breathing tube, which is visible when the snails are moving.

However, this snail is a predator, so its proximity to other mollusks should very careful. Thus, for instance, ampilia cannot be placed next to Helena, because the former is calm, herbivorous and harmless. Therefore, the predator will hunt for it. Melanii are more proffered by Helenas.

Description, peculiarities of snails-predators. What do they eat?

In nature, this species of snails lives in clean water with a sandy or muddy bottom. Therefore, in order to cultivate Helena, running water is necessary. 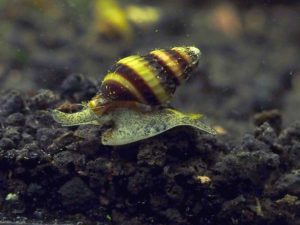 The temperature regime varies from 20 to 26 degrees Celsius, but there is one precaution: when the temperature is decreases till 19 degrees, Helena stops breeding and can fall into suspended animation, buried in the soil and closing the mouth of the shell with a special almond-shaped operculus. It is a lid that protects mollusks from attacks of other predators. The bottom of the aquarium should be fine-grained with small pebbles, which are convenient for digging after a dense dinner, peeled sand or small gravel. Water should not be too soft; otherwise it can lead to the destruction of the shell and death of the mollusk. The level of acidity should reach 7-8 pH.

Helena eats protein food that makes it a hunter. It is noticeable, when the shellfish is hungry. The speed of movement increases and it becomes clear that the predator is looking for food. If there is carrion in the aquarium, this snail will become an excellent «cleaner», they also eat eggs of other mollusks, worms and hunt for species of their own kind.

The peculiarity of the structure of this species is the presence of teeth on the radula. It is a powerful grater that grinds food. Therefore, overtaking the victim, Helena sucks it. Fish is not, unlike shrimps, because fish is too fast. Large mollusks do not come for food for this kind of predator. The artificial baiting can be ent midge, food for catfish.  The main thing is that this food should contain high level of protein.

The opinion that all snails of hermaphrodites is mistaken for this particular species. They have similar characteristics with other animals: a male and a female, mating games and a breeding season. When a couple appears in the population, it will be noticeable, but the number of individuals should be sufficient for it, because it is impossible to distinguish the snails on the basis of gender, relying on visual analysis. When two mollusks are “in love”, they are easily noticed, as they always stay together — eat, move, roll on each other, burrow into the ground and hunt. The pairing process is very slow. 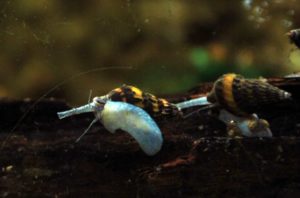 The female and male are connected by soles in an upright position, as if for a few hours. After fertilization, the snails creep away, and after a few days, upon the conditions of optimal temperature and the absence, the female lays eggs. It is advisable to plant the mollusk in a separate aquarium immediately after mating to ensure comfortable conditions for reproduction, as well as take care of the presence of special place, where the snail will be able to lay the egg. Taking into account that the mollusk can do it is separate places; it is required to ensure protection in the aquarium. The egg will look like a small bag with a yellow bead inside and about one millimeter in size. The development of a new snail will take from 2 to 6 weeks, after which the hatched «child» hides in the ground, providing itself with protection from predators. Cannibalism is not observed among Helens snails. In this period, food is carrion on the bottom of the aquarium or pond. 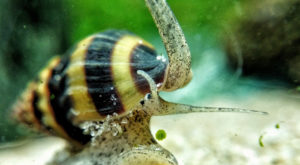 The process of growing up is quite long and takes about six months. It’s enough for the baby to grow up, get stronger and independently exist among the adults, find food and hunt. Under optimum conditions and due care, one pair of predators Helena can produce about 300 mollusks a year. However, it is necessary to remember that with the increasing population, it is necessary to increase the size of the range. Life expectancy under natural conditions is only 2 years, while in a comfortable environment it can reach up to 5 years. If the female is planted before spawning, and the younger generation grew apart from the main habitat, then do not rush to return the «adolescents» back. Let them grow stronger, grow up, adapt, and move to the usual conditions of their habitat. Otherwise, the young generation will be subjected to severe natural selection, and only the strongest ones will survive.

In the overwhelming majority of cases, predator Helena is introduced to maintain the purity of the aquarium, as well as to combat the undesirable increase in melanium, fizov and coils. But the amazing color of this snail will be an excellent decoration of your aquarium